Home » sarkari yojana » 3795 crore gift to the farmers of the government, every farmer in Gujarat will get this amount of Rs
jobmahi.in November 23, 2019 sarkari yojana

3795 crore gift to the farmers of the government, every farmer in Gujarat will get this amount of Rs

In the wake of heavy rains in Gujarat this year, most of the farmers of the state have been harmed by the crop.  In which Deputy Chief Minister Nitin Patel increased the package of 700 crore and announced a package of 3795 crore. 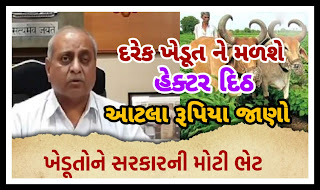 DyCM Nitin Patel's press conference
Important announcement by the government on the issue of farmers
3795 crore package announced for the state government farmers
Addressing a press conference in Gandhinagar, Deputy Chief Minister Nitin Patel said that the deficient rainfall has caused a great loss to the farmers.  Particularly at the time of harvest due to poor rainfall, it is the turn of the farmers to suffer huge losses after Diwali.  Then a special meeting was organized at the residence of Chief Minister Vijay Rupani, recently presented by the farmers to the state government in this regard.

The issue was discussed at the meeting.  In which, 3795 crore farmers were provided assistance from the state government for the deficient rainfall.  This package will benefit 56 lakh 36 thousand farmers of 18369 villages of 81 talukas.


Approximately 28.61 lakh farmers assist in 9416 villages of 125 talukas
Advertisement for assistance of Rs. 6800 per 1 hectare
Up to a maximum of two hectares, farmers will get assistance
4000 assistance to farmers in areas with less than an inch of rainfall
1463 4.70 lakh farmers of the village will also get assistance
It will also be financially viable for loss of crops without rain
81 talukas of 21 districts that have not received rainfall
Announcement of Rs

0 Response to "3795 crore gift to the farmers of the government, every farmer in Gujarat will get this amount of Rs"