Using a smart speaker? So know the matter or else repent

Smart devices, including mobiles, are becoming more and more smarter. In addition to hacking on the other hand, privacy of users and security of data has also become important. It also excludes reputed company devices and known apps. 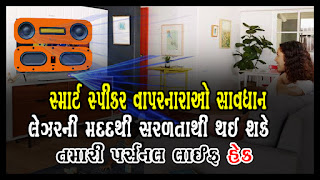 The trend of smart speakers has increased over the past few years. Now there have been reports that smart speakers capable of operating with voice assistant like Google Assistant, Alexa or even Siri are not safe.


The smart speaker knows - inadvertently, the user can give a lot of information. Experts say that smart speakers can be hacked with the laser light command. Experts in one of the research found that hackers could be hacking away from your home or office by throwing a certain frequency light at a distance. Therefore, smart speaker companies should put a light shield on it, especially on the microphone.

Amazon and Google have also confirmed that experts are investigating the warning. Apple has declined to comment. Facebook didn't even respond. A knowledgeable person can easily control the voice assistant of a smart speaker by throwing it at a distance of 350 feet with a flash light or laser pointer.

Similarly, researchers at the University of Michigan, Japan's University of Electro-Communications informed Tesla, Ford, Amazon, Apple and Google about the way to control smart speakers from light sources. Not only the speaker but also the smart lock used in the garage with the lights can be easily opened.

0 Response to "Using a smart speaker? So know the matter or else repent"