Get old records of land now online at home

Revenue Ministerl has said that while the state government has set a timely plan to ensure that the revenue services are available to the citizens quickly and easily, online NA Citizen is receiving these services more easily by providing various revenue services through technology, which is also benefiting the citizens. 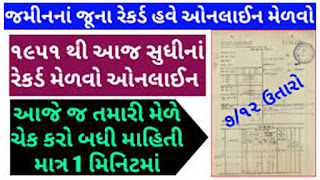 
Addressing the collectors' video conference from Gandhinagar today through the Revenue Minister, Kaushik Patel said that the record computerized record of computerized computerized computer has been made in Gujarat since 2004. Citizens who can get the E-dhara center from here as well as watch online. The digitization process is nearing completion by scanning more than 80 million pages of 7/12 pre-2004 survey of over 80 lakh survey numbers. Which will be made available online in a short time, "

The revenue minister asked the district collectors to pay special attention to the speedy disposal of the chapters filed at SIT at the district level and to release the pressure on government plots as a campaign.

Emphasizing on resolving the question regarding the issue of providing schematic benefits to the people of the far end of the state, Minister Patel added that the villagers have been asked by the state collectors, province officials and Mamlatdars to settle the issues on time bound by night. Sub-registrar offices have also been upgraded to provide revenue services to the citizens and facilities are being provided to the citizens through Model Sub Registrar Offices, ”he said.