An important decision for the people of the state has come at a cabinet meeting held at the Gandhinagar Swarnim complex. From now on, the Helmet has been complimented while riding a bike on two wheels in the borders of the municipality and the municipality. 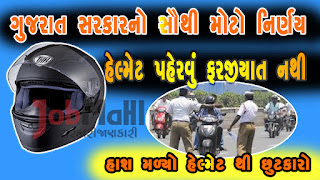 * Helmet compulsory on State and National Highways and Approach Roads


Talking to the media after the Cabinet meeting, the state transport minister said that from now on, the extent of the municipality and the municipality area and the bike will not be compulsory to wear a bike on the road and the police will not be penalized in this regard. In addition to this, it is mandatory to wear Helmet on the approach road of all highways and villages except those two areas.

What did the Minister of Transport say?

Talking to the media, Minister of Transport, Faldu said that the state government had received several requirements about the mandatory Helmet law. The cabinet meeting has made an important decision in view of the social discomforts faced by the decision and the decision to wear Helmet Mandatory.